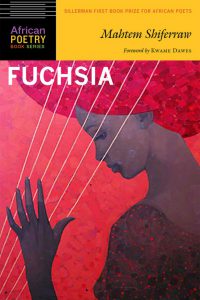 2015 Winner of the Sillerman Prize for African Poetry

“It’s a deep purple thought;
once it unraveled prematurely
and its tail broken, leaving a faint trail
of rummaging words.”
Mahtem Shiferraw. Fuchsia. 2015.

“It is exciting to see a poet working intensely at precision of language to capture the most difficult things for language to capture…. This is a study of poetic obsession, and what we get is the indisputable evidence that beyond any desire to say something, to communicate some of the complexity of the world, some polemical or political idea, there is in Shiferraw a desire to challenge her skills as a poet to capture, through the limitations of language, the infinite possibilities of our universe.” —Kwame Dawes, APBF Series Editor, Glenna Luschei Editor of Prairie Schooner

is a poet and visual artist who grew up in Eritrea & Ethiopia. Her work has been published in The 2River View, Cactus Heart Press, Blood Lotus Literary Journal, Luna Luna Magazine, Mandala Literary Journal, Blackberry: A Magazine, Diverse Voices Quarterly, The Bitter Oleander Press, Callaloo Literary Journal and elsewhere. Her poetry chapbook, Behind Walls & Glass, is forthcoming from Finishing Line Press. She holds an MFA in Creative Writing from Vermont College of Fine Arts. Mahtem Shiferraw:http://mahtem-shiferraw.com/