Each year the African Poetry Book Fund awards the Glenna Luschei Prize for African Poetry in order to recognize a significant book published by an African poet published during the previous calendar year. The winner of the prize receives $1000 USD. This year’s contest was judged by Bernardine Evaristo, an Anglo-Nigerian author of eight books of fiction and verse fiction, as well as a founding member of the APBF Editorial Board. Evaristo has selected three finalists for this year’s Luschei Prize: A Woman’s Body Is a Country by Dami Ajayi (Ouida Books), Kingdom of Gravity by Nick Makoha (Peepal Tree Press), and Collective Amnesia by Koleka Putuma (uHlanga Press). The winner will be announced on May 31.

Evaristo praised finalist Ajayi as “a dexterous and versatile poet who flexes his linguistic muscles with surprising revelations that offer new perspectives as he illuminates the slips between memory and desire, family, community, and place.” In A Woman’s Body Is a Country, Evaristo writes, “He bravely exposes intimacies and his vulnerable self through poems that are honest and confessional.”

Nick Makoha’s Kingdom of Gravity considers the terrifying Idi Amin dictatorship in Uganda, the armed struggle against it, and Makoha’s flight into exile with his parents. “Makoha crafts, contains, and intensifies this brutal, lawless, and shocking history into the most finely chiseled poems that stand alone in their graphic brilliance and gain narrative momentum in sequence,” Evaristo said. Of Makoha’s work, Evaristo continued, “His is an assured poetic voice that is epic, majestic, timeless.”

Makoha spoke with Gaamangwe Joy Mogami about the book, fatherhood, and more at Africa in Dialogue.

Makoha’s Kingdom of Gravity is available from the publisher or on Amazon.

And of Koleka Putuma’s Collective Amnesia, Evaristo said, “Everything about this poetry debut feels fresh and timely. Putuma has a liberated poetic voice that engages with politics, race, religion, relationships, sexuality, feminism, and more.”

Congratulations to our three finalists and their publishers on these stunning contributions to African poetry in 2017.

About the Judge: Bernardine Evaristo is the  award-winning author of seven books of fiction and verse fiction that explore aspects of the African diaspora. Her latest novel is Girl, Woman, Other (Penguin UK, May 2019) and others Mr Loverman, Blonde Roots, Lara, and The Emperor’s Babe. Her writing spans short stories, essays, poetry, literary criticism, stage, and radio writing. A longstanding advocate for the inclusion of writers of color, she founded the Brunel International African Poetry Prize in 2012 and The Complete Works poets development scheme in 2007-2017. She is Professor of Creative Writing at Brunel University London, and a Fellow of the Royal Society of Literature, and its current Vice Chair. She was appointed an MBE in 2009. For more, visit www.bevaristo.com 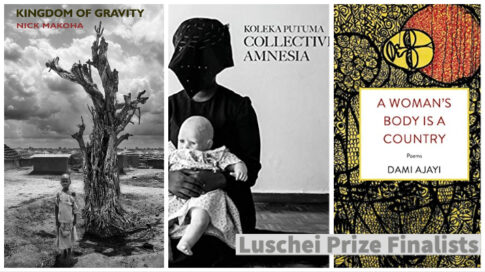