To celebrate the launch of the latest in the New-Generation African Poets Chapbook Box Set series, Saba, and the opening of the 2020 Sillerman First Book Prize in African Poetry submissions period, our book prize coordinator, Jamaica Baldwin, is talking to poets whose chapbooks are included in New-Generation African Poets: A Chapbook Box Set (Saba). The series continues this week with a conversation between Jamaica and poet Fatima Camara. The interview was conducted via email and has been lightly edited.

Jamaica Baldwin: Your chapbook Yellowline is published in the gorgeous New-Generation African Poets: A Chapbook Box Set (Saba) that just came out. Is this your first book publication? If so, how does it feel to have your first chapbook published as part of this series?

Fatima Camara: It is my first publication in terms of having a book, and the feeling is one of relief. Since I was sixteen years old, I was talking about when I would drop a chapbook and eventually write essays and novels. Now that this has been published, I feel like I actually can. Those goals and ideas no longer feel like an idea but a dream that is attainable. This publication of Yellowline feels very affirming. I am also beyond blessed for the communal support I have received during this time.

FC: The chapbook was constructed in a way to honor who and what I write for, and to work like a story. As I said, I am interested in writing a novel and I wanted the chapbook to sort of have poems that were in conversation with each other from beginning to end. I wanted to tell multiple stories about what it means to be a first-generation African here in America who struggles with being raised across cultures. The title is a play on words. My mother’s native language is Mandinka. And yellow in Mandinka means “blood” so my title also doubles as bloodline. The opening poem “Forward” is about motherhood, grief and the fear of eventually becoming. And the last poem, “Erosion,” is almost like letting go of that fear and being at a point of healing.

JB: Did you notice poetic tics once you’d put the poems together? How did you decide which tics were fruitful (interesting in that they accrued throughout the collection in a meaningful way) and which were not?

FC: Hmm. Well, I noticed I naturally fall into this narrative voice. I am very much a prose writer, and there was a part of me that felt like that wasn’t poetic. Which is ridiculous, you know. But I very much felt like that was my “tic.” And when I noticed it, I tried to challenge myself to get out of it a bit. I wanted to try other things, and I hope those attempts worked, or if they did not, folks who the read the book see that as I am releasing all of these vulnerable things; I am trying to learn myself as a writer along the way.

JB: What was the most surprising thing about the publication process?

FC: The most surprising thing about the publication process was the silence. I mean, we found out a little over a year ago whether our chapbooks were selected. We were given our edits, told to implement, sent it back, and just waited. We waited to approve the art, the look of the book and all, and just waited and waited. It was not a very collaborative/rigorous process like I assumed it would be. Which I think had a lot to do with the pandemic as well. I’ve never been published this way, so I am not sure with how traditional processes of publications are supposed to be like. But I did have assumptions and maybe even expectations about being in more constant communication with editors and meeting with the other poets who got selected prior to our public reading.

JB: I’d like to talk about the poem “Obligation,” which I read as a creation story of sorts. It touches on many of the book’s themes: the matrilineal line, the legacy of women becoming, the pain and gratitude that live inside each generation for the sacrifices made, and not made, by the women who came before. Of the mother you write, “She was a person before she was a woman. // She was whole before she was a part of everybody” (14). Later in the poem, the daughter threatens to leave, and the mother threatens to take her own life. Death and leave-taking haunt this chapbook in powerful ways: leaving homelands, leaving family, leaving the body. “We know that love isn’t about what you say yes to. // It is about what you stay for” (15). Can you talk a little bit about the role of women’s desire in the book and how this desire manifests in various kinds of leave-taking?

FC: When my grandma was a young teenager, her mother passed in a fire, and she began to take care of her little brother and got married very early. My mother left everything she knew and came to America after marrying my dad, and by the time I was twelve she was raising four of us by herself. I always say when I was twelve, I grew up. I never thought I would live a life that my dad was not a consistent part of. I did not know that I would have to take on these new roles as a caretaker, and I did not know I would abandon a lot of dreams. It was a time where my mother began to share my grandmother’s hardships, my aunt’s hardships, and so many of the struggles the women of my family dealt with. In those stories the common theme is that what they wanted did not matter in comparison of what they had to do to survive. And that is what I wanted shown in the poem of “Obligation” specifically. As for the role of women’s desires in the book, they’re kind of non-existent, like they are in the stories my mother has chosen to share with me. I’ve tried to show that in the book. There are little hints, little moments of maybe what the women in the chapbook miss or are yearning for, but ultimately those things get left behind, whether it is because of fear, grief, or duty. And that is the life I have seen so many women in my life and women of the continent lead. It is a life I am trying to break free of in many, many ways, and one of those ways is my writing.

JB: What project (s) are you working on currently that you are most excited about?

FC: Right now, I am working on this idea for a screenplay. Just working on an outline and plot mostly, nothing too concrete. I am also playing around with an idea for a historical fiction novel that focuses on the April 2000 student massacre that happened in The Gambia, Africa.

JB: This has been an incredibly tough year in so many ways. Yet there have been some unexpected connections, insights and new ways of being in the world that have sprung from this new reality of ours. Is there anything you’ve learned this year? Any insight, hope, experience, etc., you’d like to share with us?

FC: It’s hard sometimes to answer what you’ve learned in a year when you’re in a state of constant learning. It’s pretty hard to at times pinpoint the moment where you’re like “ahhh new lesson.” You just kinda look back at things, and that’s when you’re like ohhh. So, as we are still powering through, I’m learning more about my community and our needs. I wish I knew how to be more specific, but I am just doing a lot of listening and learning what parts of myself, my time, my efforts (monetary, emotionally, and physically) I can give to bettering the spaces the people I say I love occupy. So that means having these very intimate conversations on a micro level about triumphs and struggles. It also means reading and researching about policy and socio-economic factors and conditions that serve as context on a macro level for what we are all going through. I’m learning to listen better.

JB: Oh, thank you for this. Learning to listen better is so central to change. Anything else you’d like to add?

FC: Last thing I’ll say is that I am thankful. I have an immense amount of gratitude for this moment and all those who have led me here (dead and alive). Thank you.

Fatima Camara is a writer and spoken word artist from Minneapolis, MN. She is a TruArtSpeaks Be Heard alumna who has performed all over the Twin Cities metro area. Her passion for writing comes from her desire to highlight the stories of young first-generation Black people. She has also spent three years working as the programs associate for TruArtSpeaks—an arts based nonprofit organization that cultivates literacy, leadership, and social justice through the study and application of spoken word and hip-hop culture. Currently, Camara is a student at Metropolitan State University studying organizational communications with a minor in community development and organizing. 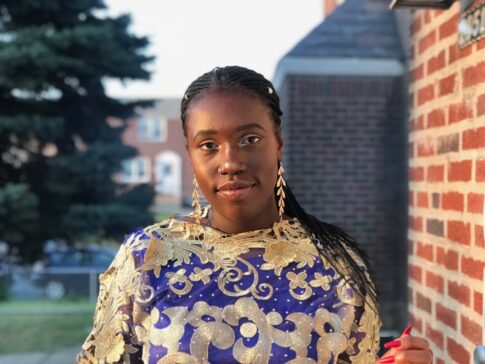