To celebrate the launch of the latest in the New-Generation African Poets Chapbook Box Set series, Saba, and the opening of the 2020 Sillerman First Book Prize in African Poetry submissions period, our book prize coordinator, Jamaica Baldwin, is talking to poets whose chapbooks are included in New-Generation African Poets: A Chapbook Box Set (Saba). The series continues this week with a conversation between Jamaica and poet Michelle Angwenyi. The interview was conducted via email and has been lightly edited.

Jamaica Baldwin: Your chapbook Gray Latitudes is published in the gorgeous New-Generations African Poets Chapbook Box Set (Saba) that just came out. Is this your first book publication? If so, how does it feel to have your first chapbook published as part of this series.

Michelle Angwenyi: Gray Latitudes is my first book publication. I’m feeling a lot of things — excited, anxious — but most of all, really delighted that I’ve been able to put together a body of work, and that poets and writers I admire so much have been a part of the process.

MA: While putting this chapbook together, I took a look at poems I had written that, in their undertones, were telling different parts of the same story. In this case, the story has a lot to do with the liminality of endings, which in many ways, are often transitions. There are three poems in the chapbook titled Gray Latitudes, appearing at the beginning, center, and end, and in this sense, act as a sort of scaffolding, a centre of gravity around which the rest of the poems are sculpted to add form to the main story.

JB: Did you notice poetic tics once you’d put the poems together? How did you decide which tics were fruitful (interesting in that they accrued throughout the collection in a meaningful way) and which were not?

MA: Yes! I noticed that I have one or two phrases that I return to when language is otherwise in a tangle — I refer to these as “crutch phrases” — and I learned that more than helping me, they were actually preventing me from accessing what it was I actually wanted to say. However, one useful tic has been the use of brackets in my poetry. One of the things I enjoy most about writing poetry is all the room there is in which to play around with words and punctuation in creating and delivering rhythm.

JB: Yes, the brackets are a notable element of your book. I enjoyed the way they informed the musicality of the poems. Tell me, what was the most surprising thing about the publication process?

MA: I’d say the most surprising thing about the publication process was how quickly everything came together. I’ve always imagined publication to involve a lot more push and pull, a lot more haggling, you know? I’m glad I had been thinking about it wrong, at least in this particular instance.

JB: I’d like to turn now to your poems. At the end of the poem, “Part II: In the Space of What’s Ended” you write, “(i speak of / letters, i speak in them)” (15). I found this speaking of and in represented throughout the book, in the spaces between the words, the “unfinished silences” as you say, the unfinished thoughts, unfinished love unraveling. In her introduction, Patricia Jabbeh Wesley says, “buried in each line is the possibility of language” (4). I agree. The unfinished unraveling of language in Gray Lattitudes struck me as possibility in its many faces. Even when the unfinishedness was about grief and loss, it was still reaching outward, often towards an empty space, an empty space that could someday be filled with anything.

We, after forgetting, don’t have to pretend any more, after desire, with noth-

[this is how I write need between, into, separation] and as for the things

That won’t leave us alone

(one longs to explain oneself)

Could you talk a little bit about your use of literal and figurative space in the book and how it connects to the themes of loss and remembrance?

MA: When it comes to the use of space, I tend to think of it as a moment for reorganization. After loss, we need time to adjust. When we remember, we approach the same memory a different way each time, based on our intervening experiences. There is a line of poetry that I often return to, by Franz Wright: “the long silences need to be loved, perhaps more than the words which arrive to describe them in time.” Space, or silence, can often feel empty, but with these poems, both with how they are written and the messages within them, I am trying to let them take on a form that gives them some body; amorphous—gray—as they may be.

JB: I love that. What project(s) are you working on currently that you are most excited about?

MA: I’m currently working on writing the accompanying text to a series of photos that a friend of mine took, and I’m excited about the variety of ways that text and imagery can support each other. I’m also beginning to plan the follow-up to BIRD: an alternative thesis, which is a small collection of poetry, photographs and essay I put together and published online about two years ago.

JB: This has been an incredibly tough year in so many ways. Yet there have been some unexpected connections, insights and new ways of being in the world that have sprung from this hardship. Is there anything you’ve learned this year? Any insight, hope, experience, etc., you’d like to share with us?

MA: I’ve learnt a lot about sitting close to fear, and sitting still while at it. As one of my favourite poets, Wislawa Szymborska, says in her poem “Possibilities,” I prefer not to ask how much longer and when. As a generally anxious person, this was a particularly difficult lesson to learn, and one that I’m still practising, but one that says, okay, you’re here now — so be here now.

JB: Thank you. I think we all could use a little Szymborska wisdom. Anything else you’d like to add about your chapbook, the series, poetry in general, the world, anything at all?

MA: I’m incredibly grateful for the opportunity to put my poetry out there, especially at a time like this. I hope that in the future, the chapbook series can have a greater presence on the African continent, too.

Michelle K. Angwenyi is a writer from Nairobi, Kenya, whose writing attempts to explore time, memory, and how archives are constructed where they intersect. She was shortlisted for the 2018 Brunel Africa International Poetry Prize, and for the 2017 Short Story Day Africa Prize. Her work appears in A Long House, Jalada, the Mays, 20.35 Anthology, and elsewhere. 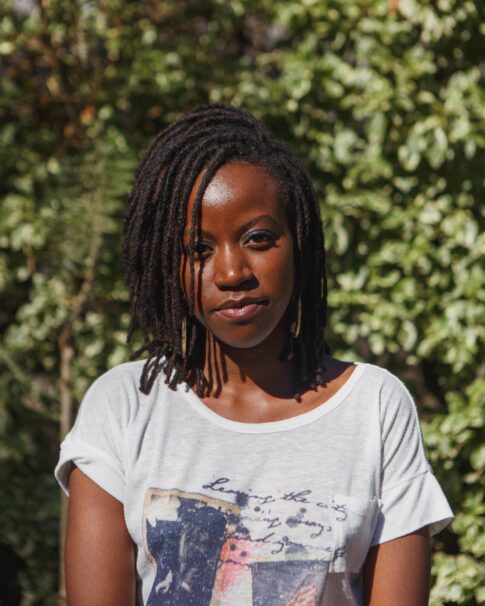