To celebrate the launch of the latest in the New-Generation African Poets Chapbook Box Set series, Saba, and the opening of the 2020 Sillerman First Book Prize in African Poetry submissions period, our book prize coordinator, Jamaica Baldwin, is talking to poets whose chapbooks are included in New-Generation African Poets: A Chapbook Box Set (Saba). This series continues with a conversation between Jamaica and poet Sadia Hassan. The interview was conducted via email and has been lightly edited for publication.

Jamaica Baldwin: Your chapbook Enumeration is published in the gorgeous New-Generation African Poets Box Set that just came out. Is this your first book publication? If so, how does it feel to have your first chapbook published as part of this series?

Sadia Hassan: This is my first book publication and I am so incredibly proud! The New-Generations African Poets chapbook box set has been a dream publication of mine since TJ Dema and Ladan Osman and Warsan Shire published in the first set. It feels good and right to be in conversation with contemporary African poets whose work I love and whose politics I respect. Also, APBF has been championing the work of Black Muslim women in a way that no contemporary press can hold a candle to. So I’m also equally proud to be part of that legacy.

JB: I couldn’t agree more. Could you describe the process of constructing your chapbook? How did you conceive of ordering the collection?

SH: The process was really involved for me. I think by the time I finally felt the order was right, there wasn’t a room in our house that wasn’t covered with books or printed-out poems. I spent a week in the living room with pages spread out so I could see which poems were best in conversation with others, either thematically or imagistically. In the end quite a few were cut, thankfully, and I reordered the remaining pieces with a sense of movement in mind. We move from physical geographic spaces in the beginning of the chapbook (Garissa, my family’s first apartment in America) to a few different emotional and psychological spaces in the middle (fear, grief, praise) and finally end in a political space (my father’s obsession with Michelle Obama, Saturday morning cartoons as an allegory for the *rump presidency).  The poems felt held together by a kind of emotional resonance that was sticky and transferred from poem to poem, so that was kind of cool.

JB: Oh, I love that you use the word “sticky.” From my own experience with ordering a manuscript, that feels accurate. Tell me, did you notice poetic tics once you’d put the poems together? How did you decide which tics were fruitful (interesting in that they accrued throughout the collection in a meaningful way) and which were not?

SH: So many tics! It wasn’t until I edited the poems together that I thought: hm, how many of these poems need to be in sections or lists? The act of sectioning/listing became more central to the structure of the collection when I realized listing disrupted the impulse I have to narrativize breaks in time. I think in fragments, so cordoning off an image or thought so that it doesn’t bleed into another is as much a desire to make room for silence and breath in a poem as it is about the act of containment. For a book about bodies and movement, there was a lot of spillage that needed containing, and so, there’s a kind of playfulness and fluidity with the form. I am still learning what tics of mine are fruitful. I don’t fully trust them until I put poems next to each other and can see where the tics share an emotional or thematic valence. For some poems, the breaks were crucial.

JB: Yes, I love that. What was the most surprising thing about the publication process overall?

SH: The length and pace of it—I genuinely had no idea it took a year, and sometimes longer, to bring a book into the world. There are so many moving parts on the editing and publishing side, and for the most part, I was spared the cutting room floor stuff. Many thanks to the folks at APBF and Akashic, who, even with a million balls in the air, were just incredibly kind and patient and a pleasure to work with.

JB: Indeed, birthing books takes time. You have a really stunning collection here. In his introduction, Mathew Shenoda states, “Hassan’s poems manage to draw attention to the fidelities of intergenerational and cross continental dynamics operating in her world, and they do so by embracing the dualities or multimodal senses of self” (6). At times these fidelities manifest as a kind of loneliness in your work. The loneliness of leaving one country for another, the loneliness of returning. In the poem “I Smell The Season of Rain Well Before It Is Upon Us,” you write, “I heard God loves a / good story and so I returned from the cold / noise of America to repent in earnest for / lonelying my mother, for leaving and / leaving for college” (10). And in “Enumeration” you state, “I wake up in a city / I’ve lonelied with my leaving / noting the newness of my life” (20). This loneliness of dual identity, of dual allegiances, is palpable throughout the book. “No one / asks / what it is like / to wake up / to your parents / keeping watch / over the world’s unlanguagable silence” (24). Could you talk a little about the connection between the role of loneliness and this unlanguagable silence in the book?

SH: This is a really thoughtful and nuanced question. Thank you for helping think through  my work in such a cogent and meaningful way, Jamaica. Mathew Shenoda’s brilliant and generous introduction touches on a vein that runs through my work more broadly. The word comes up one more time in the poem “What the Living Do” when the speaker remarks: “I think of her sister and my own, all the sisters / we’ve lost together and alone,” so the idea of loneliness in these poems is tied up intimately with loss. Loneliness is part of a parallel education for the speaker, where she learns that in her attempts to connect/reconnect to her culture, to language, friends, family there is always the risk of alienation. And that risk seems to be bound up in this unlanguageable silence, this looming unsayable thing that the speaker tries and tries in every poem to say more clearly. From the opening poem, “Sujui,” we get the sense that the speaker in these poems is articulating from a self-possessed but deeply lonely place. The “I” is in constant motion, but it is not necessarily in community with anyone. There are all of these consequential actions which remove the speaker further and further from what she thought she came to find in Garissa, which is connection. “I left school…” “I kept quiet…” “I’d become a woman…” “I try to remember,” the “I”s in these poems are anxious, questioning, caught between failures and futures that the speaker is trying desperately to negotiate in terms of how much or how little they alienate her from a world she is always trying to get back to. I’m not sure I succeeded at what I was trying to do, but by the end of the collection, I was hoping that the embodied emotions of the poems about grief, loss, joy would put the speaker back in her body in a way that made the witnessing central to the final poems less about being alienated by the world’s tragedies and more so about the speaker taking her place among her people, a people who are diasporic, resilient, and prescient. The fidelity to “intergenerational and cross continental dynamics” that Shenoda picks up on are the speaker’s attempts to make peace with and integrate bodily all of these incredibly rich and siloed experiences by kind of crashing through the silences between them.

JB: Thank you for that generous response. I’d say, you absolutely succeeded. So, what project (s) are you working on currently that you are most excited about?

SH: I’m working on a few different projects right now. Mainly a full-length poetry collection that more fully reckons with loneliness. I’m leaning on the sounds, smells, and textures of the natural world right now to sublimate the violence of border crossings, taxonomy, and notions of bodily integrity. Beyond that, I’m having a lot of fun working on a nonfiction project that explores my family’s experience of displacement in America through music and family photographs.

JB: That sounds wonderful. This has been an incredibly tough year in so many ways. Yet, there have been some unexpected connections, insights and new ways of being in the world that have sprung from this hardship. Is there anything you’ve learned this year? Any insight, hope, experience, etc., you’d like to share with us?

SH: It has. One of the most incredible and unexpected gifts of this time has been the gift of re-connection. I know physical distancing has been a lonelying experience for many of us, and it still is, but it has also been an opportunity to reconnect with folks I love despite the distance. I am among those I love, and so I’ve been trying to better care for myself, to slow down, walk outside, indulge in music and good films. I am so appreciative of the many readings, birthday parties, and book launches I’ve been able to attend via Zoom. I know that otherwise, I’d feel lonelier than I have.

JB: So true. Anything else you’d like to add about your chapbook, the series, poetry in general, the world, anything at all?

SH: I just wanna say that poetry can be intimidating, but it doesn’t have to be. Really, if writing is what you want to do, I hope that you do it in whatever way brings you joy—and that you read and write stuff that knocks your socks off!

Sadia Hassan is a Somali-American writer from Atlanta, GA. Her chapbook Enumeration is out now from Akashic Books as part of The New Generation African Poets: Chapbook Set (Saba). You can find some of her most recent work in the Rumpus, Longreads, Boston Review, Seventh Wave Mag, and the Writer’s Chronicle. She is an MFA candidate in Poetry at the University of Mississippi and the winner of the 2020 Hurston Wright Award for College Writing. 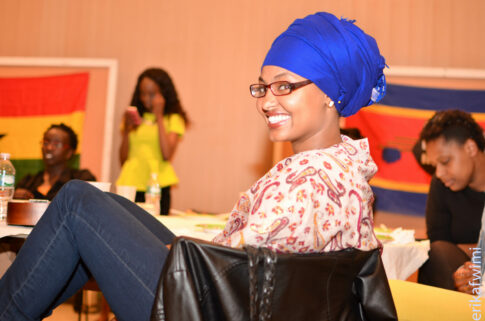