Clifton Gachagua is the winner of the 2013 Sillerman First Book Prize. 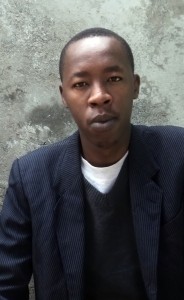 Clifton Gachaguas, winner of the Sillerman First Book Prize for African Poetry for 2013.

The winner of the Sillerman First Book Prize for African Poets for 2013 is Clifton Gachagua for his manuscript Madman at Kilifi. He will receive a USD $1,000 prize and publication by the University of Nebraska Press and Amalion Press in Senegal.

“I was driven mostly by what was for me a quest for a fresh language—something that seemed to come out of the energy of language spoken and owned, and then transformed into a poetic force that seemed sometimes out of control, but only in the way that honest passions can seem out of control,” says APBF Series Editor Kwame Dawes. “There is cleverness aplenty here and much that is provocative and troubling. Indeed, I think it is daring, careless and at times tender and vulnerable. But above all, there is a distinctive voice here. This is a strange trait to find, but when it emerges it is striking for its originality. I believe this is an original voice. This manuscript achieves what is necessary in African poetry: it feels as African as Africanness can be, and wholly contemporary and in our moment.”
Clifton lives in Nairobi, where he was born and raised. His poetry has appeared in Kwani? 06 and Saraba. He has recently finished work on a novel. Clifton is also a scriptwriter and filmmaker, currently developing a French-Nigerian feature-length film. He graduated with a bachelor’s degree in biomedical science. He has spent a considerable time of his life on East African highways, travelling from lake to coast and back, in search of both love and Jeffery Eugenides’s Obscure Object.
Share →
Tweet