The limited-edition box set is an annual project started in 2014 to ensure the publication of up to a dozen chapbooks by African poets through Akashic Books. The series seeks to identify the best poetry written by African poets working today, and it is especially interested in featuring poets who have not yet published their first full-length book of poetry. This box set features art by Tariku Shiferaw and contains the following chapbooks: Enumeration by Sadia Hassan, A Girl Is a Sovereign State by Jamila Osman, Gray Latitudes by Michelle K. Angwenyi, Measurement of Holy by Nadra Mabrouk, A Mouthful of Home by Tryphena Yeboah, Notes on Resilience by Safia Jama, The Origin of Name by Adedayo Adeyemi Agarau, Psalm for Chrysanthemums by Nkateko Masinga, Revolution of the Scavengers by Henneh Kyereh Kwaku, Try Kissing God by Afua Ansong, and YellowLine by Fatima Camara.

I will not be so bold as to make claims about directions and thematic trends in African poetry today because, after all, I come to this introduction not as someone who has attempted a deep scientific survey, but rather someone who, for the past decade, has been privileged to read a great deal of poetry written by emerging poets from Africa. And what I can say is that, as with generations of poets before them, this current generation is contending with what can best be termed “modernity” in African culture. And whereas in the past, notions of migration, globalism, and cultural “clashes” were defined by communication that was less fluid, less accessible, and more expensive, the fact is that the superficial “borders” that separate our worlds are more porous because we are traveling more, and we are connecting across all sorts of forms of media in unprecedented ways.

In reading this year’s iteration of the New-Generation African Poets Chapbook Box Set, I kept being drawn back to the idea of border crossings, of movement, and, in many instances, of migration. Many other common threads of form and content emerge in this work, but I thought it would be fruitful to consider this core notion of movement—a phenomenon that Toni Morrison, in her long essay The Origin of Others (2017), declared to be the most dominant theme of the twenty-first century. These African poets are confirming this.

Kwame Dawes, from the introduction

Titles In This Series 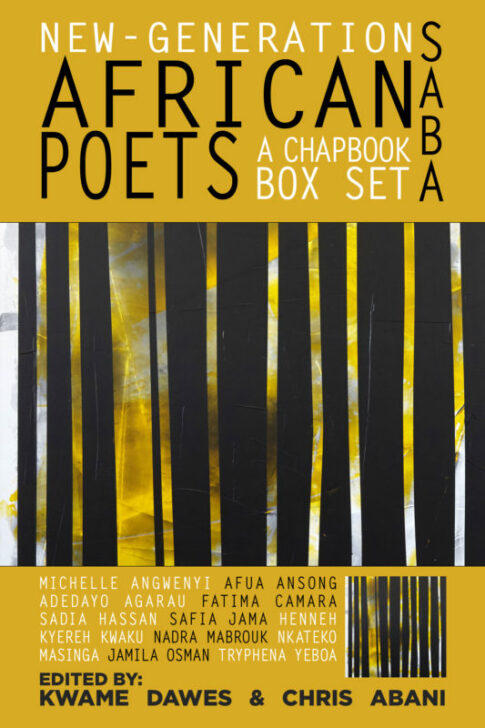